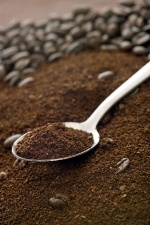 Scientists believe they’ve found a new source of antioxidant nutrients to be made into supplements. Providing further proof this beverage is incredibly healthy, the aforementioned source is the leftover grounds of coffee.

Coffee is rich in nutrients and has been proven over the decades to provide the body with disease-fighting abilities. One huge area of focus has been its amazing ability to reduce your risk of type 2 diabetes—something that gets stronger with the more cups you drink. In the course of making coffee, the actual grounds of course get left over. They are generally discarded or composted. But those messy, spent grounds contain heaping amounts of the same nutrients that are floating in your pot of java.

As reported in the Journal of Agricultural and Food Chemistry, scientists are busy making a device that could transform the gunk left over from brewing coffee into a valuable resource for dietary supplements. The ultimate conclusion they came to: coffee grounds are a rich source of antioxidants and perhaps shouldn’t just be wasted.

Around the globe, millions of cups of coffee are consumed every day. This generates, according to researchers, approximately 20 million tons of used grounds each year. Some of those grounds wind up as fertilizer used on farmland, but the vast majority is garbage on the way to landfills. Talk about waste!

Since coffee is rich in antioxidants, the researchers were curious about the level of antioxidants that remained in used coffee grounds. They studied different coffee-making methods to find answers.

RECOMMENDED: “More Evidence Emerges that Coffee’s Good for You”

In the coming years, keep watch for supplements that contain nutrients derived from coffee grounds. You might soon be able to get the benefits of coffee without having to drink a cup (if you’re not into that sort of thing). Could be a good option for people who only like their coffee with cream and sugar, but need to avoid those substances for weight management or other dietary reasons.